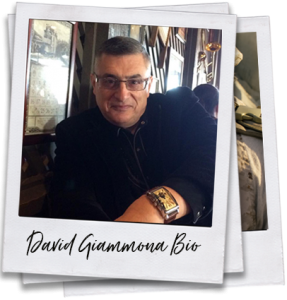 Chaplain (COL) David Giammona, U.S. Army Ret., is an end-time expert, scholar, author, writer, and speaker. He retired from the Army in June 2018 after 32 years of military service in the Army. His last assignment was the Installation Management Command (IMCOM) in San Antonio, Texas, where he was responsible for religious support on all 75 Army installations worldwide. He had oversight and administrative responsibility for over 1,000 chaplains and others, along with several thousand volunteers.

Giammona was the strategic advisor to a 3-Star Commanding General and the chief executor for the Chief of Chaplains to deliver world-class spiritual support services. Upon his retirement, President Donald Trump, U.S. Senator Ted Cruz, Pastor Rick Warren, New York Times bestselling author Max Lucado, and others sent him letters to express their appreciation for his service to his country.

An ordained Assemblies of God minister since 1988, the Colonel, has dedicated his life in retirement to writing and speaking with a focus on preparing the church and warning the world about the end times.

His education includes a Master of Divinity, Golden Gate Baptist Seminary, Master of Science in Counseling – Marriage/Family Therapy, Columbus State University, and a Master of Strategic Studies (MSS) at the Army War College.

His Army assignments include four years in the Pentagon as the Personal Assignments Officer for the Chief of Chaplains, three tours of combat duty in Iraq, Afghanistan, and Saudi Arabia, and extensive travel throughout the world as a trainer, mentor, and coach to the military.

Generals and fellow chaplains and colonels who served with Giammona describe him as a “heavy hitter” with “gravitas,” a “servant leader” who could “help lead through tough situations,” and a chaplain and Colonel chosen for this position because of his “compassion, his skills, and his love of God and country.” “He was well-liked and very well respected among people at IMCOM,” says retired U.S. Army Major. Gen Warren Patterson. “IMCOM was the headquarters of about 600-700 people, and he reached out to them. He had the utmost respect of everybody there. His staff absolutely loved him because he cared about them.

His awards and decorations include the Legion of Merit, Bronze Star Medal, Meritorious Service Medal, Joint Service Commendation Medal, Global War on Terror Service Medal, and Global War on Terrorism Expeditionary Medal. Giammona is a native of Sacramento, California. He and his wife Esther have been married for 39 years and have three adult children: Micah, Catarina, and Melissa. They are married and serving Christ. Giammona and Esther also have three grandchildren: Isaac, Michael, and Eva. Col. Giammona and Esther live at their home on the 46-acre Warrior Refuge near Columbus, Georgia.

In his free time, the world-class motivational speaker enjoys playing the saxophone, working out, hunting, and reading. He has an extensive background in music and graduated with a degree in saxophone performance from Sacramento State University. He performs at churches and other venues.

“I extend to you my personal thanks and the sincere appreciation of our grateful Nation for your contribution of honorable service to our country, You have helped maintain the security of the Nation during a critical time in its history with a devotion to duty and a spirit of sacrifice in keeping with the proud traditions of the military service."

“Congratulations. I just learned you’re retiring after over 32 years of active duty in the U.S. Army, As a Colonel and senior Chaplain, you were in charge of every Garrison Chaplain of every U.S. Army installation in the continental U.S., Europe and the Pacific. I also understand that you are a gifted musician as well. Your ministry has shown you have these qualities – speaking with integrity, living out the truth of God’s Word, preaching what you believe, living with intensity, and giving with generosity. You’ve been giving your life away by serving something greater than yourself.”

“It has come to my attention that you are now retiring after 32 years of faithful, dedicated service to our great nation as a Chaplain Colonel in the United States Army, While on active duty, you selflessly served multiple missions in support of the defense of freedom, and for that I am truly grateful.”